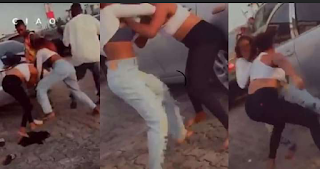 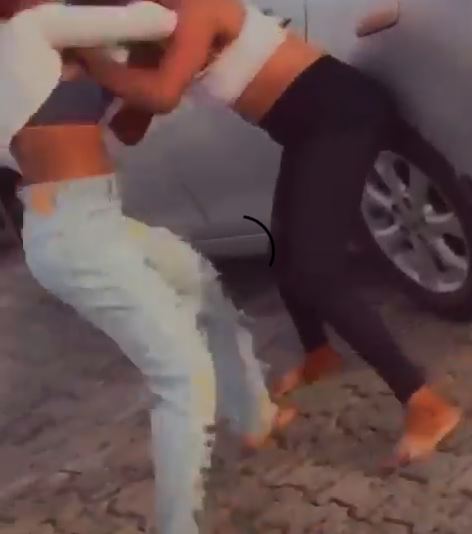 According to viral reports, the ladies are girlfriends of two close friends identified as Lateef and Bobo.

In the viral video, the ladies almost stripped themselves as they tussled in the parking lot of the popular mall.

Although the reason for the fight is unknown, onlookers intervened to stop them from fighting.

Meanwhile, two ladies were arrested by the police in Lagos for conducting themselves in a disgraceful manner by engaging in a messy public brawl.

The women identified as Ozioma Ezekwe, 24 and Franca Ogochukwu, 26, were said to have fought and tore their clothes as a result of bitter rivalry over an undisclosed matter.

The incident happened at Oyebede Street in Ejigbo Lagos where they engaged in the messy fight that attracted other neighbours.

The cause of the fight was not disclosed by the police and the two women also seemed not willing to disclose what led to the brawl.

However, it was learnt that they had a disagreement which led to exchange of hot words before it degenerated into a fight. They fought publicly before the police arrested them and detained them at the Ejigbo Police Division.