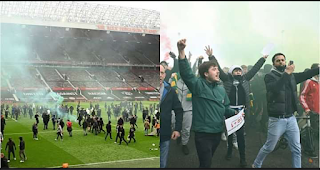 – Manchester United vs Liverpool has been postponed due to fans’ invasion

The mouthwatering encounter was slated to play on Sunday, May 2, at the Theatre of Dreams.

However, this failed to happen after furious fans stormed the venue hours to the kick-off to protest against United’s ownership by the Glazers.

The supporters, who were said to be in hundreds are further understood to have blocked their squad from leaving the Lowry Hotel ahead of the tie.

SunSport reports that United faithful had initially gathered en masse outside Old Trafford before they forced their way into the facility.

Footages from the protests later showed the protesters inside the pitch where they lit off flares.

They went on to disrupt a Sky Sports studio that had been set up to broadcast the match forcing the crew to scamper for safety.

In an official statement released by Man United, the club announced the match had now been postponed, pending an announcement of a new date when the fixture will be played.

“Following discussion between the Police, the Premier League, Trafford Council and the clubs, our match against Liverpool has been postponed due to safety and security considerations around the protest today.

“Discussions will now take place with the Premier League on a revised date for the fixture.

“Our fans are passionate about Manchester United, and we completely acknowledge the right to free expression and peaceful protest.

“However, we regret the disruption to the team and actions which put other fans, staff, and the police in danger. We thank the police for their support and will assist them in any subsequent investigations.” The Sunday protest was staged just days after a similar one that saw angry fans storm the club’s training base to exude their outrage towards The Glazers and their role in the formation of the controversial European Super League.

A number of elite European clubs signed up to be a part of the tournament in April, a move that sparked anger and outrage among football fans, pundits and football governing bodies FIFA and UEFA.

Man United alongside five other English clubs are understood to have played a pivotal part in the formation of the ESL.

However, they were forced to rescind the decision following backlash from fans.

The Nerazzurri were confirmed champions on Sunday, May 2 following Atalanta’s 1-1 draw against Sassuolo at Stadio Mapei – Citta del Tricolore.

This now means that the Old Lady have missed out on winning their 10th straight Italian League title having won the last nine editions.