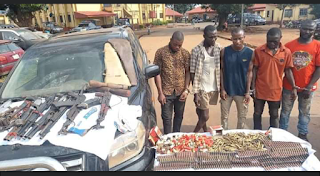 – Police operatives have arrested five suspects involved in a foiled bank robbery in Onueke, Ebonyi state – Three members of the gang died following gunshot injuries sustained during the exchange of gunfire with police – Items recovered from the gang include Ak47 rifles, pump-action guns, pistols, ammunition among others The Nigerian Police Force has recorded a huge success in taking steps to address the security challenges in the southeast geo-political zone. Operatives attached to the Ebonyi state police command intercepted 753 live ammunition of General-Purpose Machine Gun (GPMG). The ammunitions were concealed in a sac being transported in a commercial vehicle from Abakaliki, Ebonyi State to Umuahia in Abia state. Police operatives attached to the Ebonyi state police command have arrested five suspects involved in a foiled bank robbery. Photo credit: Nigeria Police Force Source: UGC The spokesperson for the police, Frank Mba, in a statement sent to Legit.ng on Sunday, May 2, said the intelligence-driven covert operation led to the interception and recovery of the deadly ammunition.  According to Mba, the force made a major breakthrough in the foiled bank robbery on the Onueke branch of a commercial bank in Ebonyi state which occurred on Tuesday, April 27. He explained that investigations into the matter led to the arrest of two members of the robbery gang at a shrine in Ebonyi state, and an additional three belonging to the group. The police operatives who were led by the commissioner of police stormed the hideout of suspects in Oriuzo village in Ezza north local government area of Ebonyi state. The suspects on sighting the police team opened fire on them. Three members of the gang died from bullet injuries sustained during the exchange of gunfire while others fled. The force recovered two Ak47 rifles, five pump action guns, six pistols, fifty Ak47 ammunition, one hundred and twenty-six cartridges, jack knives, cutlasses, and a 40-page notebook containing inventories of ammunition purchased by the gang. The vehicle used for the foiled bank robbery was also recovered by the police team. Meanwhile, efforts are ongoing to arrest other fleeing members of the gang and their spiritual godfather – the chief priest of the shrine.

. A female police officer also suffered injuries during the attack on a police facility at Ibiaku Ntok Okpo in Ikono local government area of the state on Saturday, May 1. The chairman of Ikono council, Nyakno Okoibu, in a statement disclosed that the criminals set ablaze five vehicles parked at the station’s premises.
RSS: https://www.music-wap.com/feeds/posts/default?alt=rss