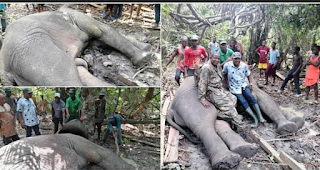 – Condemning the act, the Elephant Protection Initiative (EPI) said this is the fourth elephant that would be killed in the state in two years

An elephant has been shot dead in Ogun, making it the fourth to be killed in two years by hunters in the state.

The disclosure was made by the Elephant Protection Initiative (EPI), which took to social media to share photos of the elephant that was recently shot dead. Ogun residents took pictures with the elephant after it was killed by a hunter. Photo credit: @EPIAfrica

In the photos that were shared on Twitter, people could be seen around the lifeless animal while some sat on it.

The initiative expressed sadness that Nigeria’s population of elephants is reducing.

“There shld be a law protecting these animals if there is none yet. Everytn is food in Nigeria.”

“So wrong….Those in the picture may not be responsible but I wish they would have had some respect for this dead ellies body instead of sitting on it ….RIP beautiful gentle giant.”

“God this is sad and heartbreaking. We need to protect and love these animals. God given to us. Treasures that money cannot buy.”