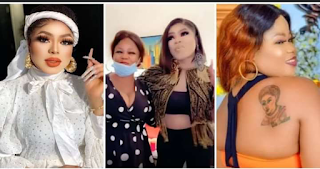 – In some recent posts, Anumba has hinted at opening up about her own ordeal with the crossdresser

It appears Bobrisky has lost yet another fan barely a few hours after his Ivorian fan, Oye Kyme, called him out over domestic abuse leading her to vacate his home.

Kyme shared series of posts on Instagram where she claimed she was physically assaulted by the crossdresser for forgetting to call his hair stylist to come to the house to loosen his hair. 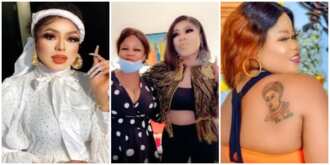 Gift has expressed plans to call the crossdresser out. Photo credit: @bobrisky, @anumbagift

Well, amidst the social media buzz with Bobrisky purportedly accusing her of trying to set him up, another lady, Gift Anumba, who also tattooed the crossdresser on her body, has spoken out.

In one of her posts, Anumba slammed the crossdresser for claiming he was being set up. According to her, it is only a fool who wouldn’t believe Kyme’s allegations to be true.

Anumba went on to drop hints that she too may have gone through a similar experience in the hands of the popular crossdresser.

“It’s heartbreaking, it’s painful. it’s annoying but it’s worth taking. Am a slow talker but I will talk soon. Calm and reserved at times are mistaken for dullness. Definition of me.”

Meanwhile, the touching story of a young man, Solomon Kolawole, who survived cancer has made the rounds on social media after he showed his appreciation to Bobrisky for helping him during his sickness.

In an interview with iBrandTV, the young man recounted how he was diagnosed with two types of cancer, lymphoma and leukaemia.

In search of funds, he reached out to Bobrisky who immediately took interest in the young man’s case and sent him some money.