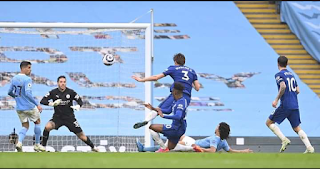 Manchester City missed the chance to be crowned champions of England on Saturday, May 8, after suffering a 2-1 defeat against big rivals Chelsea in a Premier League tie.

Pep Guardiola and his wards knew before the battle that a win would give them the Premier League title, and they did themselves lots of good by netting the first goal only for them to concede two goals in the second half.

The duel was also a dressing rehearsal for the Champions League final as Manchester City and Chelsea will be facing in Europe’s most glamour competition.

Chelsea went into this game with just the determination of avoiding defeat and maintain their stay in the top four so as to get Champions League ticket at the end of the term.

Since Tuchel took over managerial affairs at Stamford Bridge, he has been able to change the fortune of the club in which reaching the Champions League final is a testimony.

Ferran Torres had the chance to score the first goal for Manchester City in this tie in the 4th minute, but his shot went wide off target.

Raheem Sterling netted the goal for Manchester City in the 44th minute after benefiting from a good pass by Sergio Aguero to give the Citizens the lead.

Aguero would have doubled the lead for Manchester City before the end of the first half, but he missed the penalty.

Hakim Ziyech restored parity for Chelsea in the 63rd minute after getting a nice pass from Cesar Azpilicueta.

The encounter ended 2-1 at the Etihad in favour of Chelsea as Marcos Alonso scored at the death to give the Blues a glorious win. Chelsea and Manchester City stars in action in a Premier League encounter. Photo by Shaun Botterill

Earlier, Music-wap.com had reported how Chelsea players have got all the motivation they needed to win their second Champions League title when they face fellow Premier League club Manchester City in Istanbul later this month.

The Blues dispatched 13th-time champions Real Madrid 3-1 on aggregate in the semifinals despite starting the season on a poor note under former boss Frank Lampard.

Thomas Tuchel’s men have now been promised a staggering £5 million to bring the trophy to Stamford Bridge.

This is after they got an initial £5 million for ending Los Blancos’ dreams of advancing to the finals after the both-legged affair.

A goal each from Tino Werner and Kai Havertz were all Tuchel’s men needed to book their ticket and face known rival City in a few weeks from now.