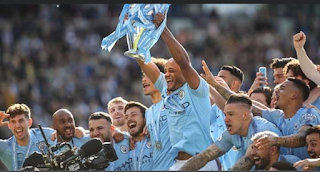 Manchester City have finally been crowned champions of the Premier League with the help of Leicester City defeating Man United at Old Trafford by 2-1.

The Foxes stunned played against a second-string United side and still worked hard to get the result at the Theatre of Dreams.

A goal apiece from teenager Luke Thomas and Caglar Soyuncu earned the King Power outfit vital three points and a massive boost to their Champions League qualification for next season.

Leicester started the game brightly as Youri Tielemans made a darting run down the right before crossing to Thomas who produced an emphatic volley to make it 1-0 after ten minutes played.

The Red Devils got back into the game six minutes later with a brilliant control of the ball from Mason Greenwood who shot with his weaker right foot to make it 1-1.

The second half was mostly dominated by the away side as they made several attempts on goal but the United defence were equal to the task. 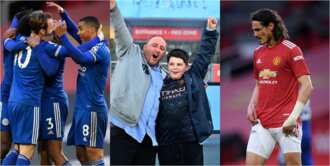 Kelechi Iheanacho had his effort at the near post saved by David de Gea after staying onside from a Tielemans’ through ball into the box.

Brendan Rodgers’s men were rewarded six minutes after the hour mark as Turkish defender Soyuncu headed home a mark Albrighton’s corner-kick which proved to be the match-winner.

Ole Gunnar Solskjaer then brought in Marcus Rashford, Edison Cavani and Bruno Fernandes but trio could not make their substitution count as Leicester ran away as 2-1 winners.

City have are now confirmed champions with their fifth title, Pep Guardiola’s third and can now put the blue ribbons on the trophy.

The Foxes dropped to fourth position following their 1-1 with Southampton and the 4-2 defeat to Newcastle within the space of a week.

Chelsea victory over Man City at the Etihad saw the Blues leap frog the King Power outfit and with three game left to play, Brendan Rodgers must grind out results to qualify for next season’s Champions League tournament.