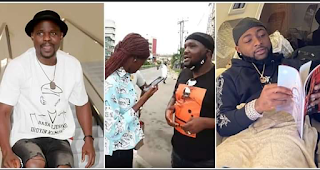 Nollywood actor Yomi Fabiyi has attracted mixed reactions from Nigerians on social media after he hit the streets of Lagos to protest the continued detention of his colleague, Baba Ijesha, following allegations of molestation levelled against him.

A video of the actor and some other individuals raising placards surfaced on Twitter and singer, Davido, could not help but react. 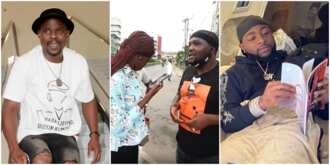 Fabiyi among some other protesters violated COVID-19 protocols by not properly covering their noses with a mask. The actor simply had the mask below his jaw as he gave a speech.

Davido was quick to point this out and he also made sure to describe the actor with an unpleasant word.

Reacting to the video, the singer tweeted:

“Notice he the only one without a mask .. mumu”

Davido’s tweet elicited mixed reactions from netizens with some people noting that he shouldn’t make comments on every trending issue.

“BABA, abeg, dey try ignore matter like this. No be every matter u for dey contribute to. Honestly, You don big pass some certain stuff. Na wetin dey cause see finish for u for industry be this. I be ur confirm fan and I no like as u dey make urself available to everything.”

“Brother, I so much respect you but you need to learn to ignore/keep shut on issues when you don’t have a sensible opinion to air. He had his mask on and logically cannot project his voice when it’s fully worn. Let us stand on the issue at hand and leave the personality.”

“How will I tell David this man adjust he’s mask to speak freely.”