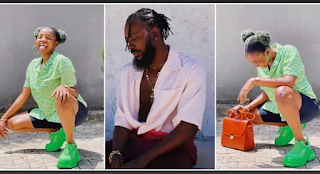 – Her husband, Adekunle Gold reveals that the shirt belongs to him and he is yet to snap a photograph with it

– The Pretty Girl singer laments that had it not been for marriage, Simi won’t rock his shirt and this generated a lot of reactions from the couple’s fans

Nigerian singer Adekunle Gold has protested about the way his wife and fellow singer Simi wore a brand new shirt of his.

On Friday, May 14, the new mother of one, rocked a shirt and shorts to pose for photos. She captioned it:

“How can you be this fine without sharing your testimony. Also my nails are so f*ked up. pulled out four of em yesterday, but if anybody asks me, I’m a say I was born this way”

Reacting to the post under the comment section, her husband Adekunle Gold claimed that he is yet to take a picture with the shirt yet his wife has taken pictures with it. He noted that this only happened because he is married to her. He wrote:

“Shirt wey I never snap picture with, you don run am. Marry! Marry! na hin be this?!” 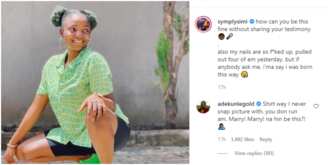 The post generated hilarious reactions from the fans of the celebrity couple. Some reminded Adekunle Gold that since they are married, the two of them have become one. Check out their reactions below:

@lawonajoke wrote: “@adekunlegold it’s actually a great feeling… No vex. She will buy another one”

@stong_boi: ” @adekunlegold you are one of the best lucky man sir, may joy, happiness and long life continue in your families, always happy for you sir”

She shared photos of herself donned in a beautiful free dress, a beach hat on her head, and a handbag to match. In the caption that accompanied the photos, the musician declared love for her husband.

Panning the camera to show the beautiful swimming pool on the lovely beach, Simi stated that Adekunle Gold deserved four more babies for giving her a lovely birthday gift.