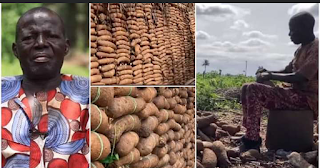 A Nigerian man with seven wives and 27 children, Goddey Ehiwarior, has said that his father taught him how to farm

A Nigerian farmer, Goddey Ehiwarior, whose story once went viral for his large barn of yam has spoken about his pastoral life.

In a video interview with BBC News Pidgin, the man who has seven wives said that he learned farming from his father since he never had the opportunity of going to school. 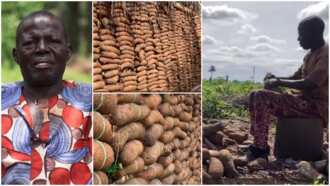 Goddey stated that he has over 100 acres of farmland where he also plants things like melons and casssava. In a confident voice, the man said that he has achieved many feats in farming without tractors as everything is done manually.

He revealed that he has been farming for the past 45 years. Goddey added that the reason food is expensive now is that people have abandoned farming.

Painting a gloomy picture, the man disclosed that things are not even expensive now compared to what will happen in the next one or two decades if the attitude to farming remains the same.

The farmer said that one million harvests of yam is no feat compared to what he achieves.

compiled some of the reactions below:

“Wow without mechanization….this is great work ….but how u dey get strength and time born 27 children?”

“This is an extraordinary achievement with his hands. One wonders what it will be if mechanisation is introduced. Government must encourage this man by providing tractors , irrigation and high yielding seedlings for increased output to feed more Nigerians especially this period of scarcity of food and high inflation.”

“This is so true. Let’s join in farming to avoid food scarcity in our country. Govt should provide mechanized system of farming and support people who want to farm…”

“See how he looks trim and active. The way those yams are arranged, shows the dedication and love for farming, exactly how cloth sellers arranges their clothes on the shelves. You truly, deserve an Award Sir for championing in almost forgone area by majority. Kudos to the entire family members.”

Sharing photos and a video, the woman said they captured how their day was going. Many people were amazed by the innocent disclosure that came with the pictures.