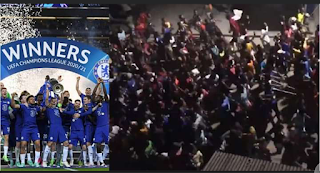 – The Blues’ glory on Saturday night, May 29, has continued to spark celebrations among fans across the globe

Thousands of Chelsea football club supporters in Ghana were seen in a footage marching and singing along streets celebrating Champions League glory over Manchester City.

Kai Havertz’ 42nd minute goal was all the Stamford Bridge outfit needed to claim the prestigious title over their English rivals at the Estadio do Dragao in Porto.

The victory saw the Blues lift their second ever Champions League title to the delight of their fans across the globe.

But in Ghana, the celebrations among the club supporters were totally different as a viral footage on social media showed thousands of youths marching and singing.

A careful study of the clip showed that the number of fans captured in that scene would be running into thousands.

Chelsea, as a football team, is famous on the continent as several African footballers were, and are still, players at the club.

Ghanaian legend Michael Essien played at the club for nine years scoring 17 goals in 168 league appearances for the team. 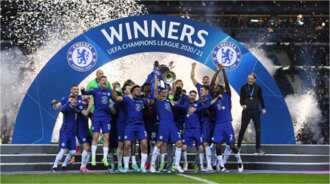 In the same vein, a clip showing a place of worship in Nigeria celebrating Chelsea’s Champions League feat has gone viral on social media.

A group of people can be seen in joyous mood while a Christian song was being played, two out them were carrying Chelsea’s flag.

‘Carry me dey go, carry me dey go, dey go’ was the song on the lips of members dancing into the middle of service like a bride walking down the aisle to meet her beloved

Members of the church all turned back and cheered the congregants dancing into the church for their darling west London club.

The midfielder placed a bet with TNT Sports journalist Fred Caldeira after the club beat Porto to reach the semifinal of the Champions League.

According to a report, the terms of the bet is that both of them would shave off their beards if Chelsea win the Champions League.