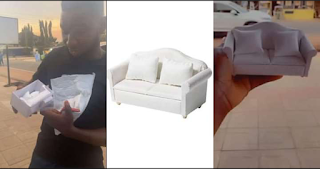 – Ghanaians have been sharing their thoughts on this and Music-wap.com has compiled some of the most interesting reactions

A young man in Ghana has gotten himself in an interesting situation after deciding to order a sofa he saw online going for a ridiculously low price.

Adu Kabena Alfred, a friend to the gentleman, indicated that the sofa was displayed on Jumia for (GHc 150) N10,000 and the young man took the opportunity to place an order for it. The good was processed for close to a month and when it arrived, it turned out to be a tiny model of the sofa which was delivered to him on a motorbike.

Many internet users have found the report hilarious and have been expressing their views on the entire happening.

Maku Wussah suggested that the gentleman simply made a miscalculated move.

“So he wanted to buy a whole sofa for 150cedis? It would’ve finished even before they decide to advertise.”

“How can u buy a sofa at 150, this happen cos people don’t like to read, I sell sofa covers , price will be stated yet someone will order and think it sofa itself, how can u buy sofa at 95gh, 125gh and 135gh, like how is this possible.

“Can’t stop laughing…. I ordered kids tablet for my son and they brought me a toy tablet.”

In another hilarious report by Music-wap.com, a young Nigerian lady took to social media to share a photo of her toilet with ceiling fan and many can’t stop laughing.

The lady with the Twitter handle @Taiyelo_lu said she just secured the apartment and she realised that the toilet has a wall fan.

According to @Taiyelo_lu, the apartment is situated in Abuja and its yearly rent is N150,000.