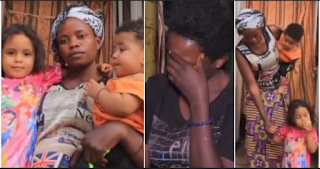 – In the video interview, the woman narrated the circumstances surrounding having kids for two different men who shied away from their responsibilities

– With help from Good Samaritans, the young lady now has a roof over her head with something to survive on

A young woman has cried out in a video about having children for two white men who abandoned her. She was left to take care of the kids.

In a viral video by Afrimax and shared on Instagram by Tunde Ednut, the woman said she met the first man who was a contract worker at a building site. After his contract expired, he left for his country despite knowing she was already pregnant. According to the young lady, the only thing the Turkish man sent was the baby’s name. Just as she was seeking how to rescue herself from her financial predicament, she met another man.

The lady said she had to approach a place for work. After the man told her that there are no vacancies, he opted to help her.

They both fell in love and she was again pregnant with another child. The happy man informed his colleagues who said marrying an African woman is against their rules.

The lady said even though the man wants to be a part of the child’s life, he cannot because his friends forbid him to do so.

With the help of Afrimax, people donated towards the woman’s welfare and now she has something to live by.

Just as she was about surviving on that pittance by investing it in soap making, the coronavirus pandemic struck and upset her plans.

Music-wap.com compiled some of the reactions below:

“How can you abandon such beautiful babies.”

“Those two cuties are blessing from God, train them well.”

“So you got played once and you allowed yourself to get played again? … ok.”

“Awwww cute babies. Madam no worry, your kids will bring you Joy. When they grow up,cyou won’t believe the favor… I pray you get all the help you can get now to survive.”

In the photos shared on Facebook, the man and his wife were dressed in Yoruba attires as Jesse wore what is popularly called agbada.

People said that their wedding’s photography is a hallmark of beauty and elegance as messages of congratulations poured in for the couple.