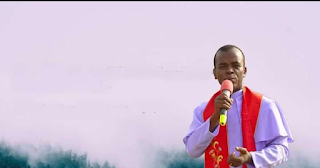 – Specifically, Mbaka was banned from commenting on politics as it affects the federal republic of Nigeria

– Also, the Catholic Church has reduced the influence of the spiritual director by converting the adoration ministry to chaplaincy

Enugu, Enugu state – In what many people will see as a big blow to the country, Ejike Mbaka, has been banned from commenting on partisan politics.

The spiritual director of Adoration Ministries Enugu Nigeria (AMEN) was banned by the Catholic church over his recent statement on the state of things in Nigeria.

The ban was disclosed in a letter to Mbaka, according to The Cable.

Mbaka has been banned from commenting on partisan politics.

With this, Mbaka will not solely oversees the activities of the ministry. Hence, it is now under the control of the Enugu diocese and gives the bishop the power to appoint a chaplain to oversee its operations.

Although the bishop said Mbaka still leads the chaplaincy, he added that he (bishop) can appoint any ministerial officer “to assist the chaplains to oversee the pastoral activities of the ministry.”

The ministry sent a statement to its members that Father Mbaka was proceeding on a one-month private prayer retreat.

The controversial cleric said the Catholic church leadership told him he would remain indoors for a period of one month to enable him to pray and meditate over his activities.

The Catholic leadership had summoned Mbaka over his recent comments concerning Nnamdi Kanu, leader of the proscribed Indigenous People of Biafra (IPOB), and his connection to the presidency.

Meanwhile, Father Mbaka has apologised and begged the Catholic Church to forgive him over his mistakes in recent times.

The controversial clergyman has been in the news following his spate with the presidency. The issue escalated when supporters of the cleric attacked the official residence of the Catholic Bishop of Enugu Diocese over the rumour of his (Mbaka’s) disappearance.

However, Mbaka during a sermon on Sunday, May 9, pleaded with Callistus Onaga, bishop of Enugu Diocese, to forgive him and his followers for their actions.