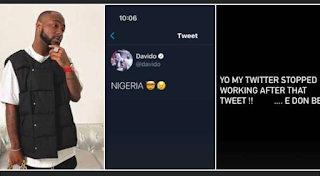 Popular Nigerian music star, Davido, like many other people in the country has reacted to the news of the ban of popular microblogging site, Twitter.

It was recently announced that Nigeria banned Twitter operations in the country and social media was buzzing with different reactions to the news.

Davido also took to his Twitter page to lament the development. He shared posts where he complained about the situation of things in the country. 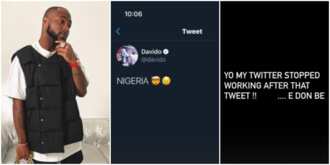 In one of his posts, he simply tweeted ‘Nigeria’ followed by a mind blown emoji. In another post, the singer posted that Nigeria was once a country.

However, Davido then took to his Instagram story to complain about not being able to use the Twitter app anymore. According to him, the application stopped working on his end after he posted those tweets.

See as screenshot below:

Read some reactions from Nigerians below:

“If they ban ALL social media platforms that’s when the war would start because there’ll be no humor to calm us down anymore.”

“It’s sad actually…because we are naturally one of the happiest people on earth. Finding something to laugh about in every dam*n situation. It’s in our DNA to be carefree and laugh and love

“They should continue o! By the time we rise up the soldiers they think they have won’t save them!”

“The truth is that it’s still young people that were used to effect the ban coz they can’t do it themselves nauuuuuu. The tech guys are all young men & women .The fact that they quickly effected the ban is worrisome.”

The microblogging site, Twitter, has reacted to the federal government’s decision to suspend its operations in Nigeria.

Sarah Hart, Twitter’s senior policy communications manager for Europe, Middle East, and Africa, told The Cable that the company is investigating the development.

In an email response, she described the company’s suspension in Nigeria as deeply concerning.