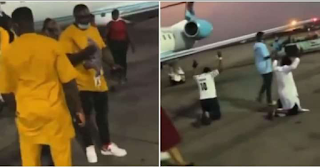 – In a video that was shared on social media, the passengers disembarked from the plane and started praising God for journey mercy

A video making the rounds on social media has got people talking as passengers of a flight could be seen thanking God for sparing their lives.

In the video that was shared on Instagram by Nigerian artiste and social media influencer Tunde Ednut, the passengers disembarked from the plane and started giving gratitude to God. 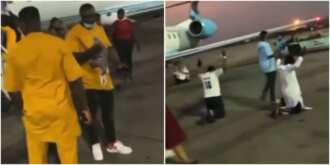 Some of the passengers give gratitude to God for sparing their lives. Photo credit: @kingtundeednut

According to a passenger, the flight from Abuja to Port Harcourt almost ended in tears because the pilot lost control of the plane and almost crashed in the bush.

The passenger said the plane dangled in the sky for almost 30 minutes before the pilot finally got control of it and landed it without casualties.

Many react to the video

Reacting to the video, @30bgnurse said:

“Apart from the entertainment industry, what else works in Nigeria?”

“That 30 mins will be the Longest 30 mins in their lives. I’m just glad none of the passengers died of shock, this country Na waaa.”

“This kind of experience can be very scary.”

“Thank God for his mercy.”

In the video, one of the pilots could be seen shaking his body to the song while his colleague joined him and started spraying him money.

The video, which was shared on Twitter by @Gidi_Traffic, has generated a lot of reactions on social media as tweeps loved it.