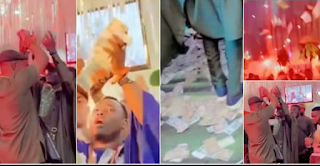 – Nigerians on social media have reacted to the video, with some asking where the boys are seeing money when the economy is tough

A video has emerged on social media in which some big boys could be seen throwing money in the air at a wedding ceremony in Benin, the Edo state capital.

The boys brought out bundles of cash and threw it in the air and guests could be seen picking some for themselves. 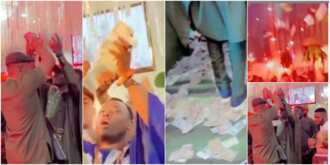 There was money rain at a wedding ceremony in Benin, courtesy of some big boys. Photo credit: @instablog9ja

In the video that was shared on Instagram by @instablog9ja, the boys could also be seen on stage spraying some guests as naira notes littered the floor.

Many have shared their thoughts on the video

“Why are they picking money at someone’s occasion?”

In a video that was posted on Instagram by @instablog9ja, the soldier went on his knee and popped the question.

The question took the lady by surprise and she didn’t know what to do at first. She then hugged her lover’s friend and colleague while her man was still on his knee waiting for her to say yes.