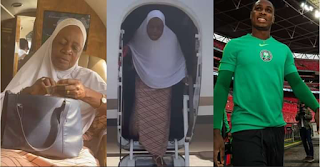 – As they returned home aboard a private jet, Ighalo’s mom stated that she prefers UAE as there is constant electricity in the Emirates’ state

After what could be described as a lavish vacation in the Emirate city of Dubai, former Nigerian international Odion Ighalo and his mother have returned to the country.

He finished the season playing 13 matches, scoring 9 and providing 3 assists to wrap up the campaign in style and then head for holidays alongside his mother.

Ighalo was earlier seen helping his mother on a cruise boat in Dubai in what could be described as a lavish vacation as the player captioned the clip ‘she is my Queen, I will do anything for her’.

And in a latest video, Ighalo’s adorable mother was seen expressing mixed feelings as she returned to Nigeria.

“I get fans, she chuckled,” while her son referred to her as ‘Mama Al Shabab’.

“You know say na me be Mama Al Shabab, no be Man United again. I wan remain for UAE. No up NEPA for UAE.”

Ighalo who joined the club side on a two-and-a-half-year contract in February ends the season in style. Recently, his mother was seen celebrating his goal at the stands telling her son that she is impressed and the former Watford of England goal-poacher expressed delight that she was able to make it to the stadium for the first time.

earlier reported that Nigerian legend Odion Ighalo has bagged his first player of the month award since he moved to the Saudi professional league earlier in the year.

His presence has also seen them move to the second position on the table this season having finished outside of the top four in the past.

The former Super Eagles attacker has now been crowned Al–Shabab’s player of the month for May after an impressive performance.